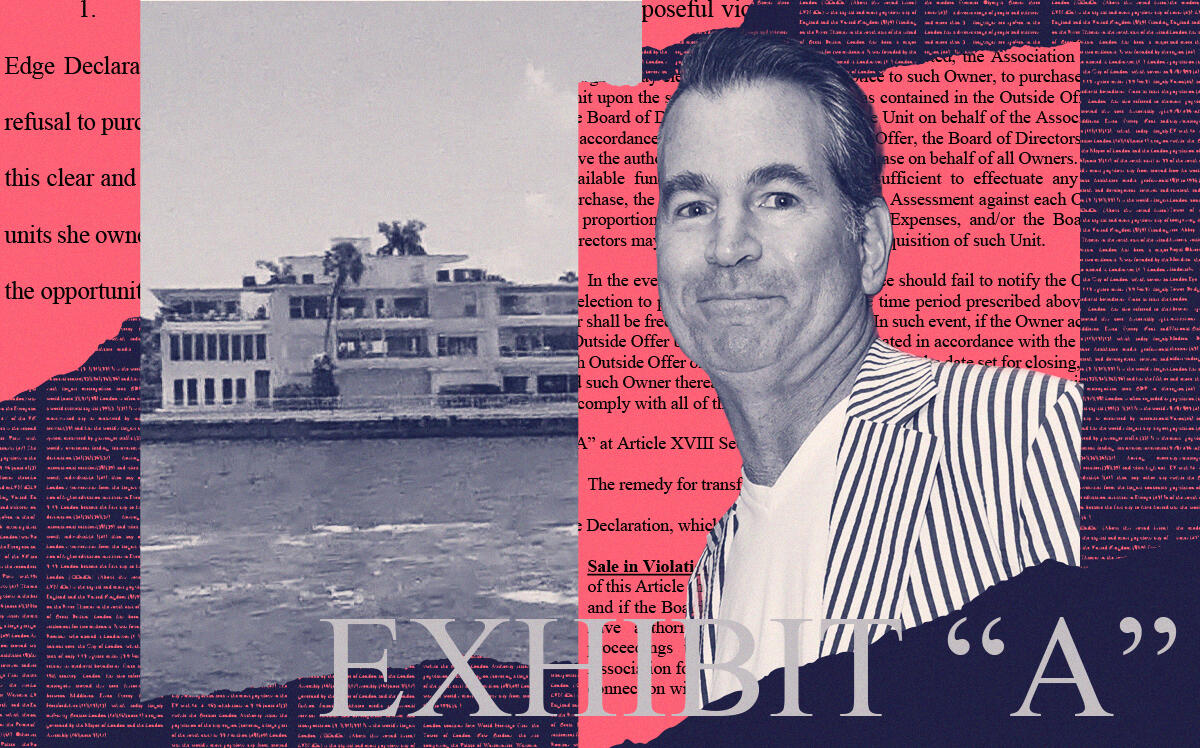 Current and former unit owners at a boutique waterfront building in Bal Harbour allege that the condo board president has illegally obtained control, with the goal of ultimately terminating the association and redeveloping the property.

Litigation between Water’s Edge House condo board president Joseph Swedroe and former unit owner Marlene Feuerring dates back nearly two decades. Swedroe, who is a partner at his father’s architecture firm and a real estate agent with Beachfront Realty, owns seven of the 11 units at Water’s Edge House, built in 1954, at 286 Bal Bay Drive.

At the root of the dispute is that Feuerring and the now-owners of her former units allege Swedroe has illegally claimed the right of first refusal to purchase units when they become available without going through the correct process. Swedroe and the association allege that Feuerring violated the condo declaration by bypassing the association.

If Swedroe were to acquire enough units to eventually terminate the association, he could sell the property to a developer for a significant markup or redevelop it himself. Developers are increasingly targeting older properties through condo buyouts because little undeveloped waterfront land is left. And in the year since the deadly condo collapse in Surfside, more owners are willing to sell.

Swedroe, his attorney, Aaron Behar, and the condo association’s lawyer, Evan Berger, did not immediately respond to requests for comment.

According to Miami-Dade court filings, Feuerring had entered into a deal in November of last year to sell her units to a non-Swedroe buyer, but Swedroe wanted to purchase the units. The board was unable to vote to exercise the right of first refusal on Feuerring’s units because two of the three board members had a financial interest in the outcome of the sale, a.k.a. a conflict of interest.

But at an emergency special meeting in December of last year, seven of the 10 unit owners present voted in favor of the association purchasing the units with Swedroe as the true buyer, according to court filings. Swedroe is listed as a manager of the LLCs that own six units and he owns one unit in his name, giving him the seven votes.

After the vote, Swedroe notified Feuerring and her buyer that he was “ready, willing, and able to close” on the units, according to the lawsuit he filed against her last year in Miami-Dade Circuit Court. Feuerring “refused to cooperate” and said she will not sell the condos to him without a court order, according to his complaint.

A judge dismissed Swedroe’s lawsuit with prejudice, court records show, and Feuerring’s buyer backed out. She ended up selling the units to her real estate agents, Lisa Miller and Hayley Sloman of The Girlz LLC in March for $1.7 million, property records show.

Swedroe and Feuerring’s disputes date back to 2004, when Swedroe sued Water’s Edge House and unit owners, including Feuerring and her late husband, Ralph. That complaint is not available online. In 2020, Feuerring sued the condo association and Swedroe, alleging that Swedroe breached his fiduciary duties “by engaging in self-dealing” as association president, for allegedly failing to maintain and repair the common spaces, resulting in water intrusion to Feuerring’s property, which ultimately devalued her units.

Fast forward to this year, in May, when Water’s Edge House sued Feuerring, Miller, Sloman and The Girlz LLC for breach of contract and equitable, declaratory, and injunctive relief after Feuerring sold her unit to The Girlz LLC. A hearing on whether the case will be transferred to complex business court is set for Sept. 9.

The defendants – Feuerring, Miller, Sloman and The Girlz LLC – seek the court’s appointment of a receiver to take over the association. They allege that Swedroe has perpetrated the association’s alleged “flagrant breach of fiduciary duties and gross mismanagement” through “years of unchecked self-dealing and breaches” of the condo declaration. They claim Swedroe has led the charge on special assessments to all owners at the building to fund his lawsuit against Feuerring.

Attorney Jordan Isrow of Government Law Group, representing Feuerring, and her buyers in the lawsuit, said that once a majority owner has control of the association, it leaves the remaining owners with little leverage.

Isrow said the association doesn’t have the meeting minutes that statute requires, documenting previous votes on exercising its right of first refusal for previous purchases.

“A lot of these people are older or part-timers and they aren’t paying attention as much,” Isrow said, referring to aging condo communities in South Florida. “This is the tip of the iceberg. My hope is we can get a good result.”