You are here: Home1 / News2 / Large self-storage facility may be coming to Atlantic Avenue and Turnpike... 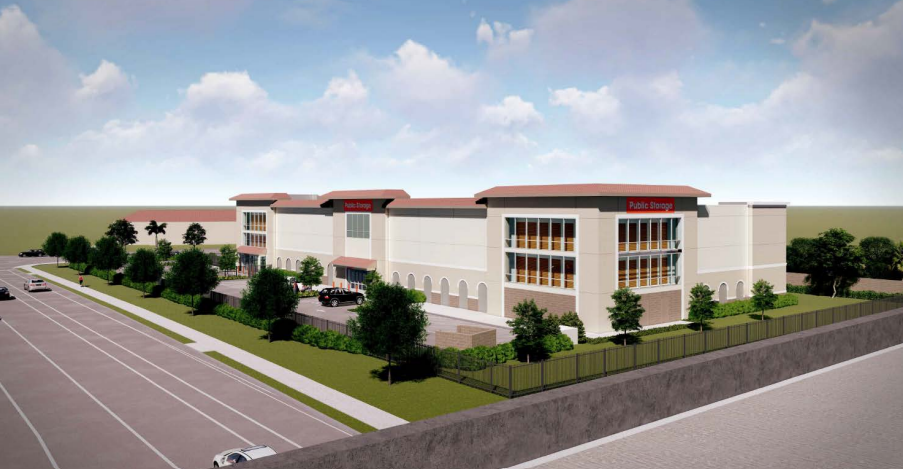 Rendering of large self-storage facility at the intersection of Atlantic Avenue and the Turnpike west of Delray Beach – Neil Schiller, Attorney For The Applicant

The country’s largest self-storage company, Public Storage, is looking to build a three-story facility on the southwest corner of Florida’s Turnpike and Atlantic Avenue.

The County Zoning Commission on Aug. 25 granted a necessary variance, the first approval in what will be a lengthy process to build a three-story, 71,259 square-foot facility on a vacant parcel west of Delray Beach in an unincorporated area of the county.

According to documents submitted to the county, the 1.8-acre parcel is often used by vagrants. It is full of beer bottles and litter. Cars are parked on it illegally.

“This (a self-storage building) would be a major upgrade,” said Neil Schiller, the attorney for the applicant.

The variance was needed because the parcel is currently part of the Waterways planned unit development that was built nearly 30 years ago. All such developments need to have frontage on a major highway. In this case, it was on Atlantic Avenue.

Schiller explained that the requirement now needs to be waived to allow the facility to be built as the parcel serves as the development’s Atlantic Avenue frontage.

Schiller noted that the approval will not affect the ability of residents to enter and exit the 189-unit gated community. “Everything will stay the same,” he said, adding that both the residents and the users of the storage facility will use Tranquility Way, the access road into the Waterways off Atlantic Avenue. 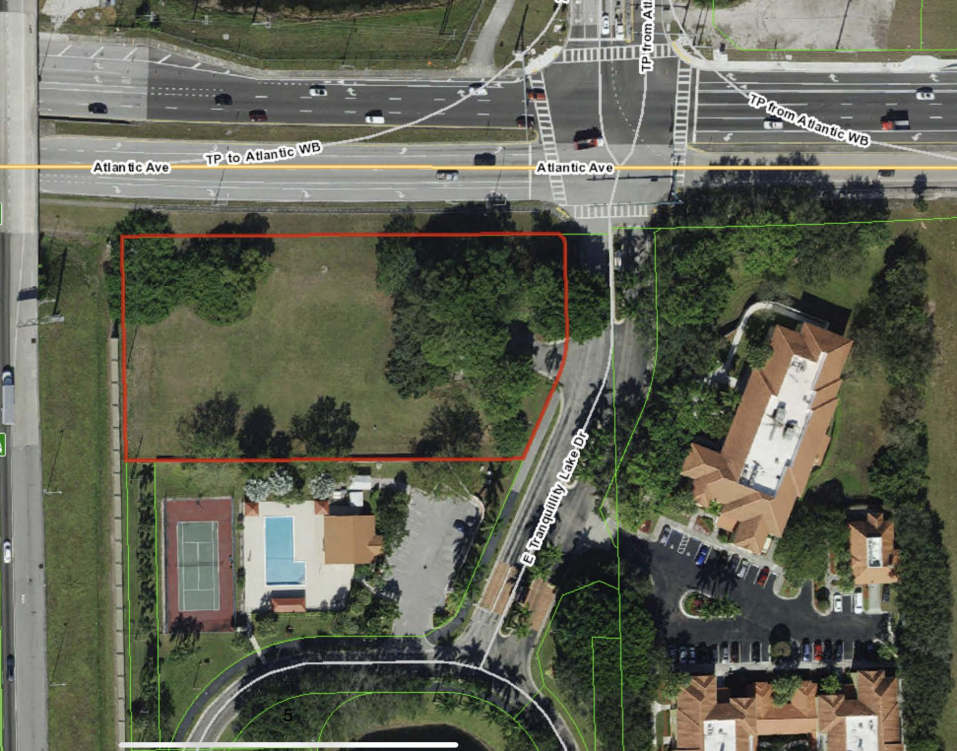 Vacant lot in red is where a large self-storage facility would be built west of Delray Beach at the Atlantic Avenue and Turnpike intersection – Neil Schiller, Attorney For The Applicant

Staff recommended that the variance be denied, arguing that the granting would “confer a special privilege” to the applicant since all other planned unit developments have had to comply with the frontage requirement.

Staff noted that when the Waterways’ development was approved, it met the frontage requirement. Removing it now creates an “inconsistency with the requirements of the county’s zoning code,” staff reported.

But the zoning commission accepted Schiller’s argument that without the variance, the property owner would be stuck with a property that could not be built upon, creating “an undue hardship.” And Schiller noted that both the Waterways HOA and the Alliance of Delray Residential Associations support the project. Other projects under consideration included a gas station and a fast-food restaurant. Such projects, he said, would create far more congestion than a self-storage building.

With the variance approval, Schiller will return to county officials asking that the land area be deleted from the Waterways’ development and that a land-use change be approved as well. Without the variance, the project could not have moved forward.

The zoning commission had the ability to grant the variance change on its own. The subsequent applications will need the approval of county commissioners. According to Schiller, there have been six other parcels at Turnpike intersections with commercial elements.

Public hearings are expected to be conducted early next year. If approvals are granted, construction could begin sometime in 2024.

To gain the support of the Waterways HOA, Public Storage addressed all the association’s concerns, Schiller said. It went so far as to redesign the site plan to make it more palatable to the HOA and it even took the color orange out of much of the project. Orange is the company’s corporate color and almost all of its buildings have a large dose of orange, he noted.

“They didn’t like it so we removed almost all of it,” Schiller said. “We did everything they wanted.”

Mike Diamond is a journalist at the Palm Beach Post, part of the USA TODAY Florida Network. He covers county government and transportation. You can reach him atmdiamond@pbpost.com. Help support local journalism. Subscribe today.