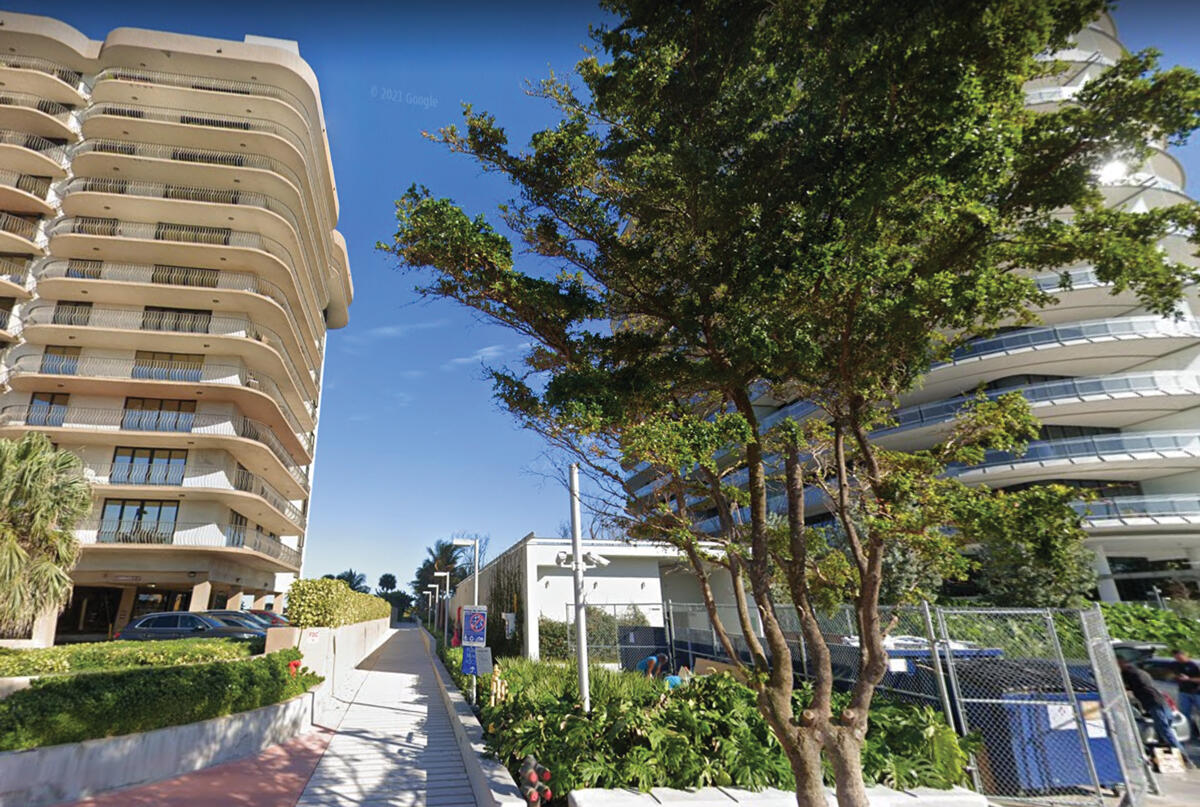 After the construction of Eighty Seven Park (Google Maps)

When developer David Martin acquired the Dezerland Hotel, a former Howard Johnson’s that was built in 1951, his plan was to restore the North Beach building to its original glory. The stakes were high for Martin, as the project would mark his first oceanfront development.

The property, on the northern border of Miami Beach next to Surfside, was not designated historic. And less than a year after the 2013 purchase, a Martin-led entity hammered out an agreement with the city of Miami Beach that increased the project’s footprint, expanding it closer to the Surfside border and just feet from Champlain Towers South.

Publicly, plans also changed: Now Martin’s development firm, Terra, and its partners would build a luxury condo tower called Eighty Seven Park on the hotel site. Opposition, delays and questions regarding the proximity of the building and the effects of its construction on Champlain Towers South would follow, years before the collapse of the Surfside tower next door.

As part of the deal with Miami Beach, the company developing Eighty Seven Park, 8701 Collins Development LLC, agreed to pay the city a voluntary contribution of $10.5 million, tied to Miami Beach giving up 87th Terrace, a 50-foot-wide street separating the adjacent properties.

Some believe the land was transferred to the developer in a way that violated the city charter.

Preservationists opposed the demolition of the Morris Lapidus-designed hotel, as well as the vacation, or ceding, of 87th Terrace. Residents of Champlain Towers South didn’t like that Miami Beach was giving up the street and its public parking.

Construction of the Renzo Piano-designed Eighty Seven Park at 8701 Collins Avenue reverberated next door, causing Champlain Towers South to shake, according to residents’ accounts cited in lawsuits and interviews, and 8701 Collins Development is named among defendants in lawsuits filed by survivors and family members of victims after the collapse.

Though the National Institute of Standards and Technology’s investigation into the June collapse of Champlain Towers South is ongoing, engineers, architects and other experts have said the construction of Eighty Seven Park did not cause the fall. Champlain Towers South had a number of major structural issues that went unaddressed for years.

But residents were worried even prior to construction of Eighty Seven Park about the condo project’s impact on their aging building.

“We’re concerned that where before we had the street as the buffer from the existing lot, now that the city has sold that to the developer, it brings the action so much closer to our building,” said Champlain Towers South unit owner Alberto Manrara during a March 2015 Miami Beach Design Review Board meeting.

Manrara sold his sixth-floor apartment, which overlooked Eighty Seven Park, in April, just two months before the northeast portion of Champlain came crashing down in the middle of the night on June 24, killing 98 people.

Martin and Terra declined to comment through a spokesperson.

In 2019, Terra, alongside Bizzi & Partners, equity investor New Valley and other partners, completed Eighty Seven Park, where the most expensive unit, a penthouse, sold for $37 million last October.

Out of the public eye

Since the collapse, Martin, who has worked hard to build his reputation as a sustainable developer, has been laying low. The Coconut Grove-based company he leads with his father, Pedro Martin, stopped promoting its projects throughout Miami-Dade and Broward counties. That includes a luxury condo it is building, alongside developer Russell Galbut, at the entrance to South Beach, and a new mixed-use office project in Bay Harbor Islands.

Peter Zalewski, a condo market consultant and investor, said Martin was in “acquisition mode” at the beginning of the last cycle. He and his father founded Terra in 2001, but the company has grown dramatically over the past decade, building Quantum on the Bay, 900 Biscayne Bay, Grove at Grand Bay and a number of projects in suburban cities such as Doral and Pembroke Pines.

In 2013, Martin called developer Gil Dezer, whose family owned the Dezerland site, requesting a tour, Dezer said. The Terra-led entity ended up buying it, allowing the Dezers to make a huge profit. 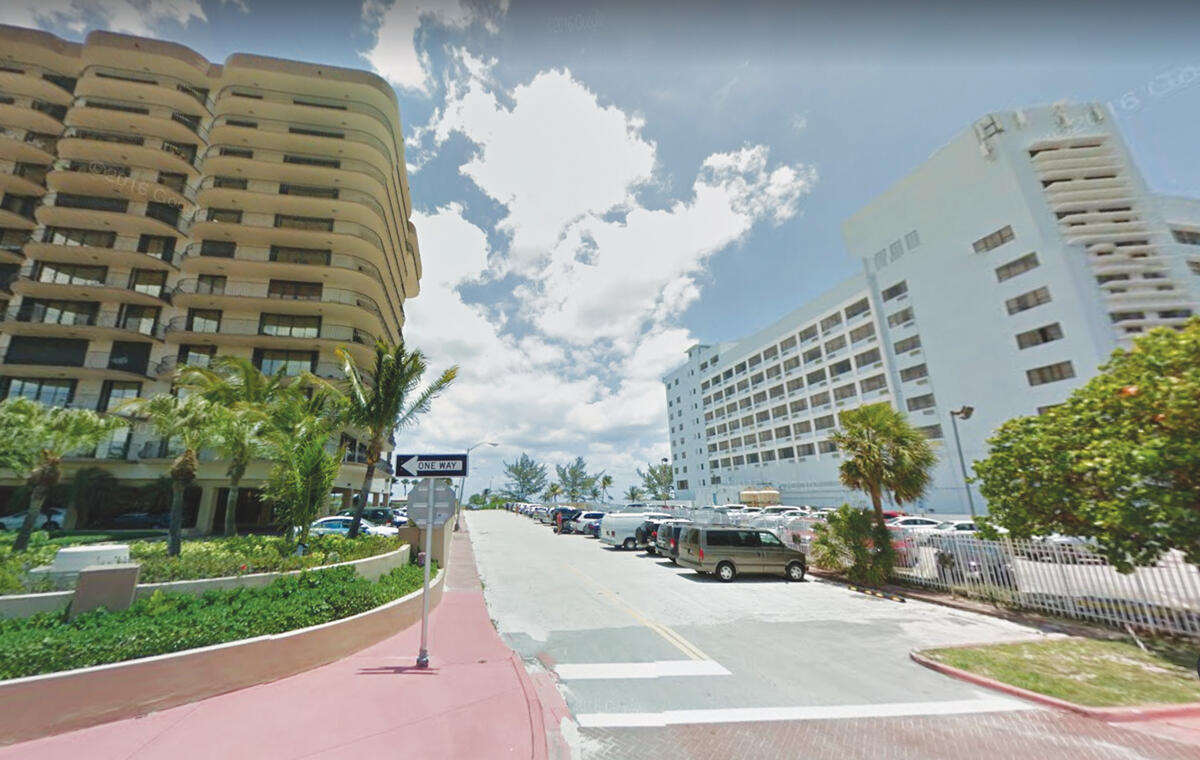 Champlain Towers South and the adjacent 87th Terrace property before

“He built a very expensive building there. We didn’t see the values he saw,” said Dezer, whose family paid about $7 million for the property in the late 1980s, a few years after Champlain Towers South was built. Terra purchased it for $65 million.

At the time Terra was negotiating the purchase of the Dezerland, the developer was building Glass, an 18-story luxury condo building in South Beach. In 2020, the Glass condo association sued the developer, contractor John Moriarty & Associates and subcontractors over a litany of alleged construction defects. Moriarty also built Eighty Seven Park.

Years earlier, in 2014, associations at Quantum on the Bay also sued an affiliate of Terra, alleging the developer cut corners during construction of the nearly 700-unit development.

But the Terra-led 8701 Collins Development LLC, which acquired 87th Terrace from the city, did not have to get residents’ approval. The loophole came in the form of a 12,000-square-foot sandy plot of land sandwiched between 87th Terrace and the beachfront. The original survey of the land, dated June 1919 and signed by early Miami Beach developer J.H. Tatum, identifies it as one of many tracts now owned by Miami-Dade Public Works.
The city’s analysis of its charter, as part of its agreement with the Eighty Seven Park developer, found the same. Spanning just over 18,000 square feet, 87th Terrace is not oceanfront. The city found that vacating the plot of land or right of way served a public purpose by enhancing pedestrian access to the beach, increasing property taxes and beautifying North Shore Open Space Park, which is immediately south of Eighty Seven Park.

Street or alley vacations are common across the country, experts say. Attorney Keith Poliakoff, managing partner of Fort Lauderdale-based Government Law Group, said the alleys or dead-end streets no longer serve the purpose of housing utilities that they had when municipalities mapped them out years ago.

But critics of such actions say the process results in a giveaway to developers. In South Florida, residents have increasingly spoken out against them. The Coral Gables commission recently rejected plans for a mixed-use development downtown as a result of an overwhelming public outcry, due in part to a proposed vacation of an alley.

“We feel extremely strongly that vacations of city right of ways shouldn’t be happening without going through a voter referendum, as it is in the city charter,” said Tanya Bhatt, past and acting president of Miami Beach United, a volunteer activist organization.

Land use attorney Gloria Velazquez, a shareholder at the law firm Nason Yeager, called the Miami Beach agreement unusual because it tied the vacation to the $10.5 million voluntary contribution, instead of the overall project approval. Another attorney said the development agreement was “terribly worded” by suggesting the $10.5 million was a payment for the vacation.

The vacation, in the form of a perpetual easement, allowed the Terra-led entity to take over most of the alley. It left space for a pedestrian walkway to the boardwalk and beach that the developer built and was responsible for maintaining, eventually handing maintenance over to the condo association. The Eighty Seven Park condo tower, which has an underground parking garage, is on the southern half of the oceanfront lot.

Eighty Seven Park’s construction was delayed early on. Generally, project delays are common, the result of a combination of overambitious developers, a longer-than-expected financing timeline, and a push for positive publicity.

In the case of Eighty Seven Park, the developer’s LLC financed more than 90 percent of the $65 million purchase with a loan. When 8701 Collins Development sought demolition approval of the Dezerland, instead of a restoration, North Beach residents protested.

They called the change a “bait and switch,” said Daniel Ciraldo, head of the Miami Design Preservation League. A lawsuit filed in 2016 by a debt brokerage seeking a commission from the developer shows a Terra affiliate planned to redevelop the site before it had even closed on the 2013 acquisition.

The vacation resolution and the development agreement with the city of Miami Beach were finalized in 2014. The developer would be in talks with the Champlain Towers South residents and its association years later.

As part of the agreement, 8701 Collins Development LLC was required to receive a full building permit by Sept. 3, 2016. That month, the developer requested a one-year extension of the building permit deadline, citing the governor’s declaration of a state of emergency over the Zika outbreak.

Once construction was finally underway in 2017, residents of the adjacent Surfside tower, who were likely aware of problems with their building, were again voicing their concerns about Eighty Seven Park.

At a February 2018 Miami Beach Design Review Board meeting, the city postponed a vote on modifications to the site plan and approval. Attorneys for Eighty Seven Park and the group of Champlain residents who were concerned about the project spoke in favor of the continuance to the following month. In March 2018, the Terra-led entity withdrew its request, which dealt with perimeter walls and fences, according to a recording of the meeting.

In emails sent to the town of Surfside, Champlain Towers South board member Mara Chouela complained that residents were “concerned that the construction next to Surfside is too close,” including that the workers digging at Eighty Seven Park could be damaging the structure of Champlain.

Developer Edgardo Defortuna, whose Fortune International Group has built and sold a number of high-end condo buildings in Miami-Dade, said in an interview with The Real Deal in June that when it constructs a tower, Fortune will install a vibration monitoring device on nearby buildings to ensure that the work is being done safely.

The crisis communications firm hired by Eighty Seven Park’s developers after the collapse did not respond to a question about whether the developer installed such a device at Champlain, where residents said construction caused their units to shake.

During construction, which involved digging piles deep into the site, debris was also landing in the pool and on the pool deck of Champlain, clogging up the driveway and front entrance with sand, emails show. Concrete trucks were illegally parking in a city-owned lot, according to emails between Terra and Miami Beach.

The developer offered the Champlain Towers South association a $400,000 payment in 2019 if unit owners agreed not to publicly oppose the project and accept longer hours of construction, the Washington Post reported in July. But the association did not accept the settlement.

The Champlain property manager wrote in an email exchange with Surfside that year that “money doesn’t seem to be an issue” for the developer, suggesting Eighty Seven Park would pay the $5,000 fines for the debris and continue to allow workers to let it land at Champlain.

After the collapse of Champlain Towers South, Eighty Seven Park remained closed for more than two and a half months to residents who did not sign waivers. It reopened in mid-August. The partial collapse and the controlled demolition of the rest of the Champlain building in early July created instability on the site that led that portion of Collins Avenue to remain closed for a much longer period than initially expected, out of fear that the street would cave in.

The National Institute of Standards and Technology’s investigation into the collapse involves going through the history of the building and town code, evidence reservation, geotechnical and structural engineering and more. An August Miami Herald investigation found that the original design was flawed, adding to damning structural and engineering reports that had already been made public by the town of Surfside. Investigators have said they will look at all possible causes and contributions to the collapse.

“You have an old, antiquated building, and you have a brand-new tower with underground parking being built less than a street away,” Zalewski said. “It would be impossible to not look at Eighty Seven Park’s impact, if any, on the collapse of the tower.”