You are here: Home1 / News2 / Are you ready for a 3D-printed house? They’re cheaper, stronger and long-lasting, d...

The three-bedroom, two-bath home has a corduroy-patterned exterior, rounded corners — and a cement pour that oozed from an industrial-sized toothpaste tube. And most intriguing of all, it comes from a 3D printer.

When the house is finished around November, Kyndra and James Light, a husband-wife development team, will be asking between $175,000 and $225,000 for the 1,440-square-foot dwelling.

The printed homes are said to be quicker to make, stronger, and resistant to such Florida hazards as mold, hurricanes and flooding. And most crucial of all: They seem poised to offer affordable housing in a state where many have forgotten there can be such a thing.

But to see for yourself, South Floridians will need to saddle up and head for Tallahassee to inspect the house, which the Lights say is the only permitted 3D-printed home in Florida.

We’re all becoming used to hearing about such 3D printed objects as face masks, jewelry, jet engines, construction equipment and even guns. It’s a method of developing a three-dimensional object, layer by layer, through the use of computer-generated designs.

The 3D homebuilding process is similar, but the printer itself looks less like those becoming more common in workplaces, and more like an oversized car wash. The printers weigh almost a couple of tons, cost between $500,000 and $700,000, and include sophisticated computer programs to control construction. They feed instructions to racks — which can range in size from 10 feet long by 10 feet high, to 100 feet by 100 feet. Attached to the racks is a spout, which goes back and forth over the site directing the premixed cement according to the design. The mix then hardens into a concrete structure.

“Make no mistake, these houses are not your average test models,” said the Lights, owners of Precision Building & Renovating, which is based in the state capital. “The finished product is far superior in strength, durability, and efficiency.” 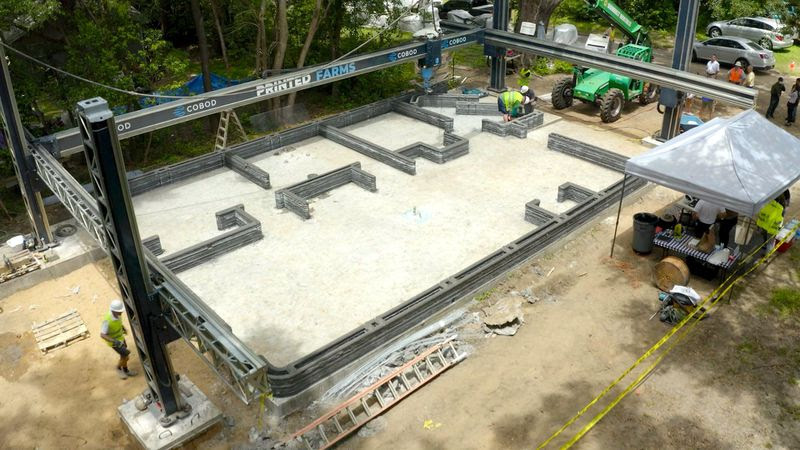 3D-printed homes could be the answer to Florida’s long-standing affordable housing shortage. But Tallahassee developers James and Kyndra Light, who say they are building the only permitted 3D home in the state thus far, say it will take a wider availability of printing technology for the homes to take hold in the market. (Precision Building & Renovating,/Courtesy)

From coast to coast, 3D-printed homes are gaining ground as a possible alternative to making housing more affordable in cities roiled by exploding prices and thinning inventories. The idea is to cut production time and labor costs and sell solidly built homes at prices that lower-income earners can afford.

Other 3D home projects around North America include:

The Tallahassee home project has attracted lots of attention from a visitors including state lawmakers, as well as support from the city, Kyndra Light said.

“The City of Tallahassee has been extremely supportive of the project,” she said. “We made sure we did our homework so we presented them with something that was a viable option.”

“Tallahassee being the state capital, there are a lot of representatives up here — that kind of helped,” he said. “That was a spark of interest: ‘Hey, here’s a solution to a major problem I have.”

That problem is affordable housing.

The project is funded in part through the City of Tallahassee’s affordable housing construction loan program. Once completed, the home’s price will be capped at 80% of the area’s median income.

The cost to maintain the home will be less than a standard wood-frame home, the Lights said.

“Wood breaks and wood rots, especially here in the South,” James Light said. “In time, we will be able to offer investment opportunities for families that are more accessible, and with a longer range of return.” 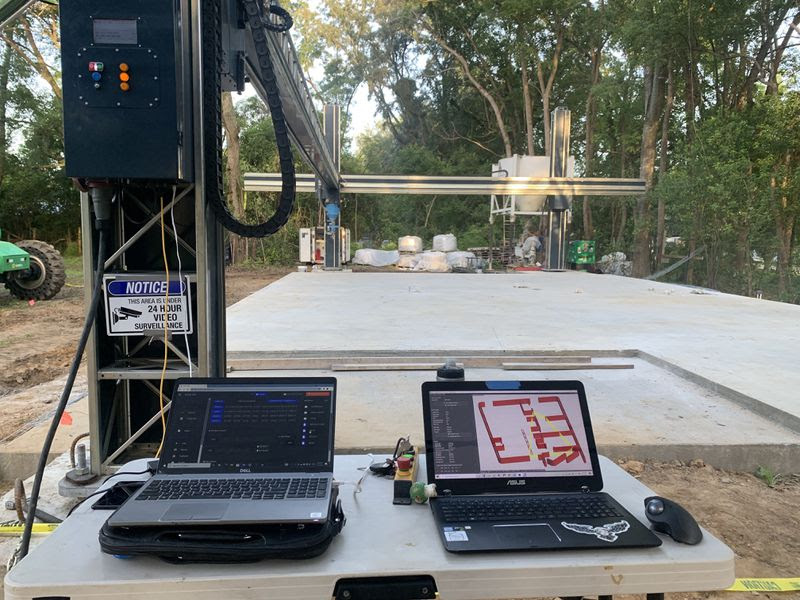 The printing machine used by Printed Farms of Wellington, whose workers and equipment laid out and poured the mix for a 3D printed home under construction in Tallahassee. (Precision Building & Renovating,/Courtesy)

Wellington firm in the vanguard

While no 3D homes appear to be on the immediate horizon in South Florida, the company that poured the concrete for the Tallahassee project is based in Wellington, and has several Florida projects in the works, the owners said in an email.

Jim Ritter and Fredrik Wannius, co-founders of Printed Farms, accepted delivery of their first printing machine in August 2020 from Denmark.

“The material arrives in super sacks and is loaded into a silo,” he added. “The material is mixed [in the system] with water and pumped into the hopper of the 3D printer.”

He said a 1,540 square foot home can be produced in two to three weeks, depending on inspections, roof system and whether exterior window and doors are installed.

“This is from forming the slab to covering of the roof, he said. “We can print the walls in four to five days.”

Wannius said his firm has not encountered any local building code problems to date,

“Our buildings have superior materials and are stronger than most current building methods,” he said.

He added that the firm intends to build a luxury 4,500 square foot house on the Intracoastal Waterway in Lake Worth.

“We are approved for design and moving forward on structural engineering,” he said. “This will prove that building high-end and luxury homes is cheaper and better quality then conventional. We feel we are more resistant to mold, hurricane and flood. Our freedom of design makes the cost much lower because curves don’t add expensive forming costs. This home will have the first 3D-printed pool.”

Wannius said Printed Farms is also in negotiations to build a two-story house in Tampa for a client, and is looking to build a single-family home for the University of Miami, an AirBnB for another client and a luxury horse farm in 2022.

“Those projects have been hand-picked from 600 requests since February,” he said.

South Florida may have to wait

Despite the rising levels of interest, real estate and development experts in Broward, Palm Beach and Miami-Dade counties said would-be buyers in the region will probably have to wait at least two to three years before 3D homes make a significant splash in the tri-county area.

“The housing industry hasn’t changed its overall methods of building homes in the past 50 years,” said Brad Hunter, president of Hunter Housing Economics in West Palm Beach. “Innovations like 3D and modular construction will start to gain popularity.”

“I think that there’s going to be an accelerated pace of innovation in housing in the next five to 10 years,” he said.

“I think we are in the embryonic stage. The car is just starting to run,” he said. “There are people who are betting big on it. They are seeing this as the future. I heard the strength of the building because of the poured concrete is actually stronger than a typical home.”

“There are differences between us in the tri-county area and the Tallahassee neighborhood where that couple built their home,” said Fort Lauderdale attorney Keith Poliakoff of the Government Law Group.

The main difference is that hurricane-vulnerable South Florida is in a high-velocity wind zone. Projects need statewide or local approvals to ensure they meet stringent building codes.

“While the technology is novel … it’s still a little bit off for them to be commonly used throughout the tri-county region for hurricane reasons and the ability to build larger structures,” Poliakoff said.

But Kyndra Light said 3D homes can arrive on a mass scale faster if builders, developers, regulators and others act in concert to make them happen.

“If we can all lock arms and walk down the Yellow Brick Road, so to speak, that is what it will take,” she said.