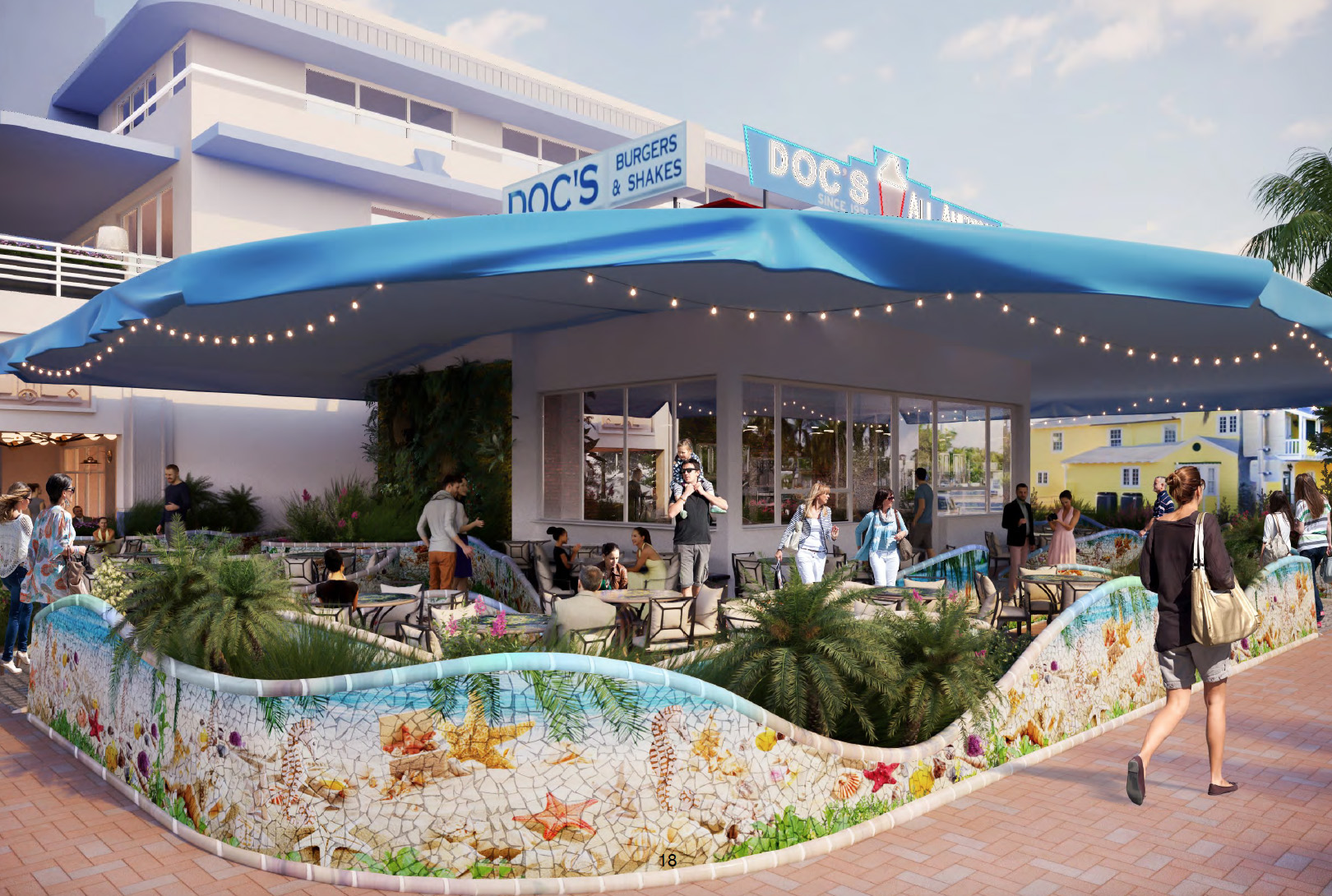 Rendering of the new Doc’s

With one iconic Delray Beach institution—Old School Square—in play, the fate of another goes before the city commission today.

That would be Doc’s, the retro burgers-fries-soft ice cream restaurant just north of the intersection at Swinton and Atlantic avenues. Last year, the city rejected a proposal that would have preserved Doc’s in exchange for allowing a three-story office building on the adjoining property that faces West Atlantic Avenue. The developer, which owns both properties, is back with a new version.

It has two parts, both of which are on the agenda for today’s meeting. The first would place Doc’s on the Local Register of Historic Places, ensuring that no owner could tear down the building and, say, put up a McDonald’s. The second would allow construction of that office building on land now home to a Dunkin’ Donuts.

The linkage is important. Commissioners opposed the previous version in large part because—without the historic designation—there was no guarantee that the developer would preserve Doc’s after getting approval for the office building. Designation would ensure Doc’s continued existence.

“This is the next step in the evolution of Doc’s,” said Neil Schiller, the attorney who represents the developer. Regarding the changes since last year, Schiller said, “We believe that we have done what we said we would do.” 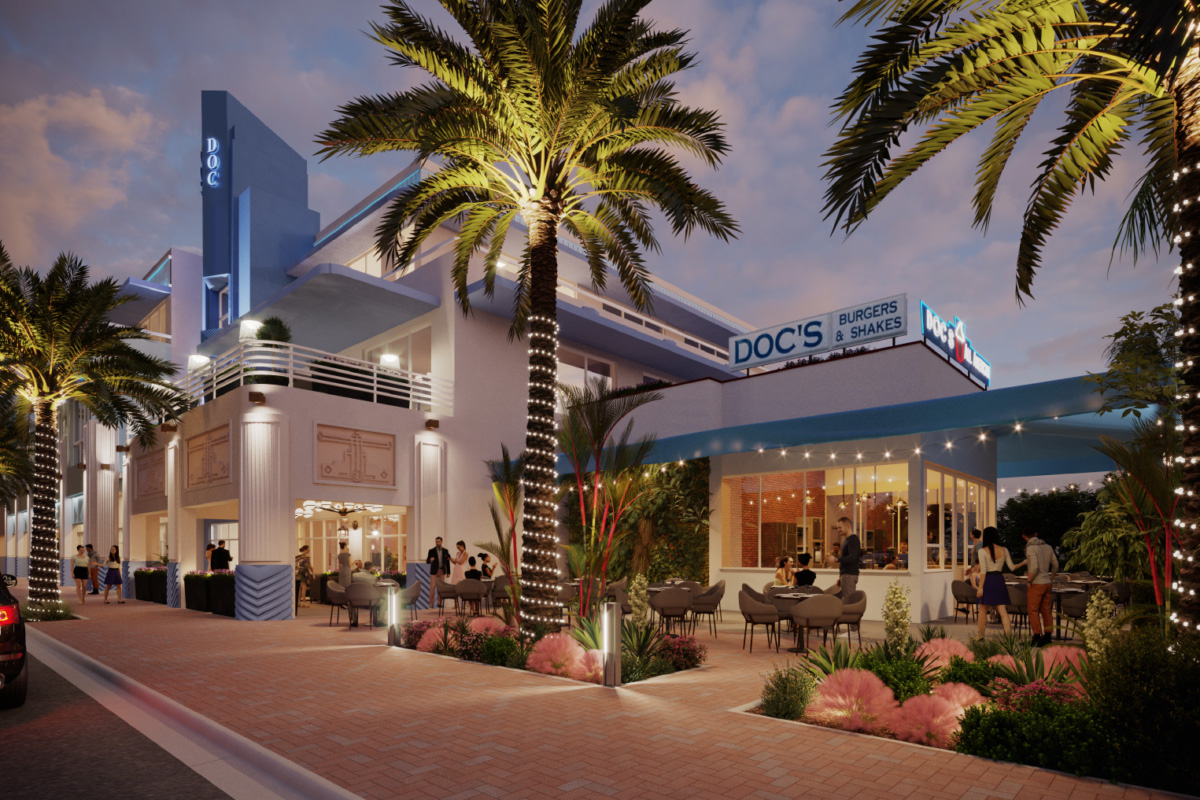 Though there would be much debate about the proposal anyway, another factor could be the developer. It’s Steve Michael, who originally proposed the project known as Midtown that has become Sundy Village under different ownership. Some critics believe that Michaels didn’t pay due consideration to the historic properties within the project.

With Doc’s, Schiller said the new proposal “softens” the Art Deco architectural style that some found off-putting. Doc’s itself will be “more prominent when you’re looking west from Old School Square.” Michael, Schiller said, will hire “a restaurant group” to run Doc’s. Schiller said the developer also has reduced the square footage of the office building.

Critics might complain that Doc’s would be part of the overall project, not a free-standing building. Schiller responds that this plan “keeps Doc’s Doc’s.” And Delray Beach needs more office space. That’s one reason the Downtown Development Authority supports the project.

Some commissioners might try to have it both ways, by supporting the designation while opposing the land-use change. The designation vote comes before the land-use vote. But without the office building, there is no project—and no guarantee of keeping Doc’s Doc’s.

This is the first reading for the three proposals. If they advance, there will be a presentation and public comment at the second reading. If the land-use items fail, the project dies.

Commissioner Ryan Bolyston opposed the first version. He called this one “great,” even though he would have preferred Doc’s as a stand-alone structure.

But Boylston emphasized that linkage. If you want to save Doc’s, he said, “You can’t have one without the other.” 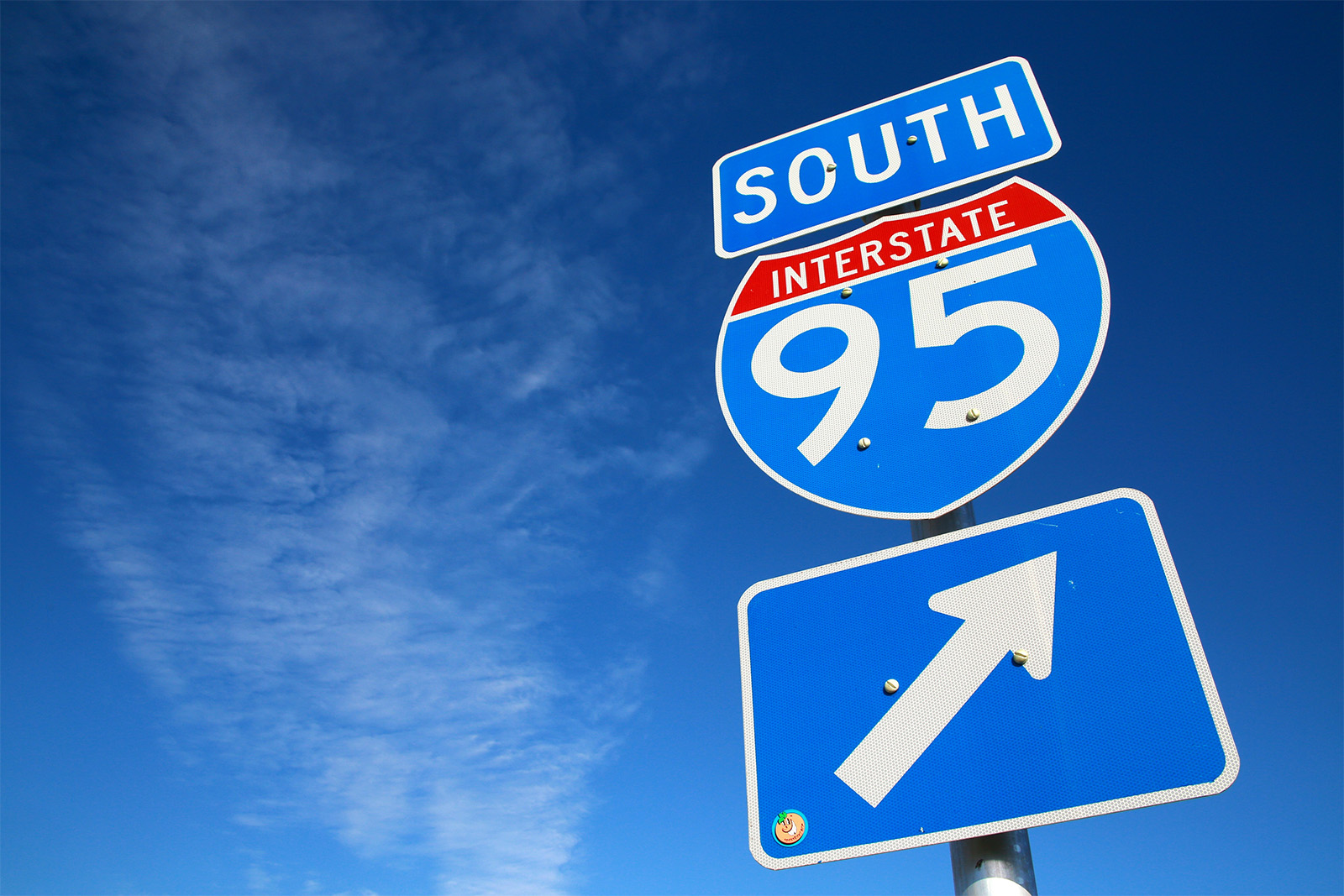 The Florida Department of Transportation (FDOT) expects completion of the $102 million stretch from Southwest 10th Street in Deerfield Beach to south of Glades Road this fall. An FDOT representative said Monday that work should be done Oct. 29 “weather permitting.” On that schedule, toll collections for that section would begin “later this year.”

Two lanes in each direction will be for drivers willing to pay for the exclusivity. Prices will be much higher during rush hour and lower during off-peak times. Other drivers will have three lanes northbound and southbound.

The other Palm Beach County phase, costing $148 million, will extend the toll-lane format to Linton Boulevard. According to FDOT, the work is nearly 60 percent done, with completion estimated in late 2023. Part of the work involves replacing the overpass at Clint Moore Road. The representative said the new structure should be in place next summer.

A key feature of the I-95 work is the new interchange at Glades Road. It is a Diverging Diamond Interchange, which will require drivers at times to be on the left side of the road. Traffic engineers believe that the unusual design will allow more vehicles to move more quickly through one of the county’s biggest chokepoints.

FDOT estimates that the new interchange will be ready in late 2022 or early 2023—again, “weather permitting.” But the representative said other work on Glades Road would continue until late 2023.

Beginning Wednesday and lasting until Nov. 17, the Delray Beach Library will host a timely, significant exhibition.

It’s called “Americans and the Holocaust,” the touring version of the exhibition that opened in April 2018 at the United States Holocaust Museum in Washington, D.C. After its debut in Delray Beach, the tour will continue to 50 other libraries in the U.S. until 2023.

Espcially since the murder of George Floyd last year, there has been discussion throughout the country about America’s history when it comes to oppressed and marginalized people. This exhibition continues that scrutiny.

As a news release states, “Based on extensive new research of that period, ‘Americans and the Holocaust’ addresses important themes in American history, exploring the many factors—including the Great Depression, isolationism, xenophobia, racism and antisemitism—that influenced decisions made by the U.S. government, the news media, organizations, and individuals as they responded to Nazism. This exhibition will challenge the commonly held assumptions that Americans knew little and did nothing about the Nazi persecution and murder of Jews as the Holocaust unfolded.”

During its time in Washington, the exhibition generated much debate. Here is a review from the HistoryNet website:

“Americans and the Holocaust” highlights evidence of American apathy and racism toward not only Jews but African and Asian Americans within its own borders—including legalized segregation, Jim Crow laws, and Japanese-American internment— as well as indifference to news reports of the Nazis’ increasingly violent anti-Semitic rule.

“Through interconnecting rooms, visitors can explore a timeline of historical displays featuring coverage of Nazism through American newspapers, newsreels, and film that evidences the mounting pressure for Washington to respond as Hitler’s bloody campaign peaked. Each section contains interactive displays, photos, videos, documents, and short documentaries on wartime views of Nazism.

“As news headlines spotlighted Nazi Germany’s ill treatment of its own citizens throughout the 1930s, the Roosevelt administration stayed uncomfortably silent. One possible reason for that is shown in a display of a 1938 poll revealing that two-thirds of Americans believed that German Jews were either ‘entirely’ or ‘partly’ to blame for their own persecution.” 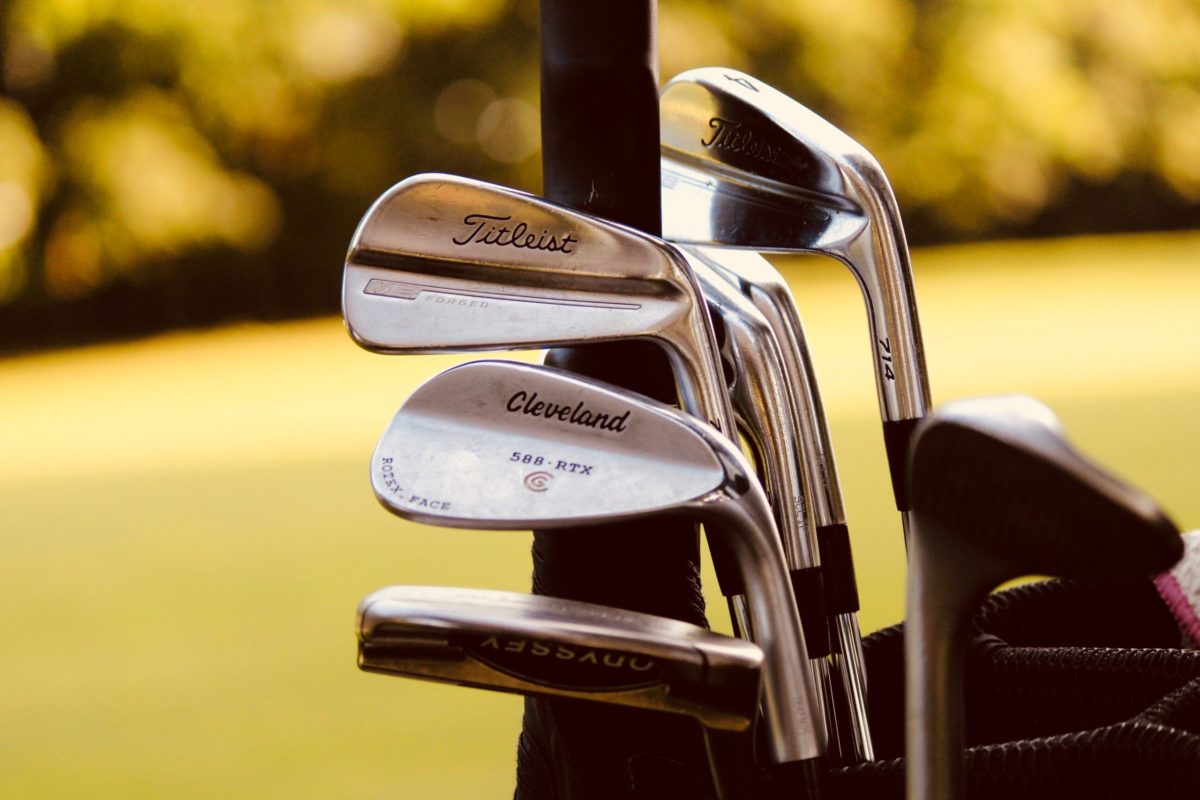 Despite Florida’s recent, deadly COVID-19 surge, organizers of next month’s TimberTech Tournament in Boca Raton promise something “more like a traditional tournament.”

Because othe pandemic, fans could not attend last year’s event at Broken Sound’s Old Course. Spectators will return for the Nov. 1-7 event along with what Eddie Carbone of Pro Link Sports calls “a full force of volunteers.” Those are the generally anonymous people without whom tournaments would falter. Organizers held a media event on Monday.

TimberTech, which makes products for decks and other exterior structures, signed a three-year deal to sponsor the event through 2023. The tournament, part of the PGA Champions Tour—once known as the Senior Tour—has been played in Boca Raton since 2007. Boca Raton Regional Hospital continues to be what Carbone calls the “primary beneficiary” of the event.

For most of its history, the tournament was held in February. The tour changed its format—again because of the pandemic—and this year’s event will be the second of three to cap the season. The top 36 finishers will go on to the Charles Schwab Cup Championship in Phoenix.

In recent years, feral cats were an issue in Boca Raton, bringing out passionate cat people. Now Delray Beach is talking about cats.

On today’s city commission agenda is approval of $25,000 to consider the type of trap/spay/neuter/release program other cities have adopted. The staff memo cites “concerns raised about community cats and the need to respond humanly (sic) and proactively.” The city would work with Palm Beach County Animal Care and Control, the Peggy Adams Animal Rescue League and Purzzilla Cat Rescue, Inc.

The memo cites the county’s ordinance for controlling “community cats.” They must be on private property. All such cats shall be vaccinated against rabies, sterilized and implanted with a tracking microchip. And all “caregivers shall make reasonable attempts to remove young kittens from the field for domestication.”