“Next time you hear someone disparage our profession, it is worth remembering some of the exceptional work done here.” 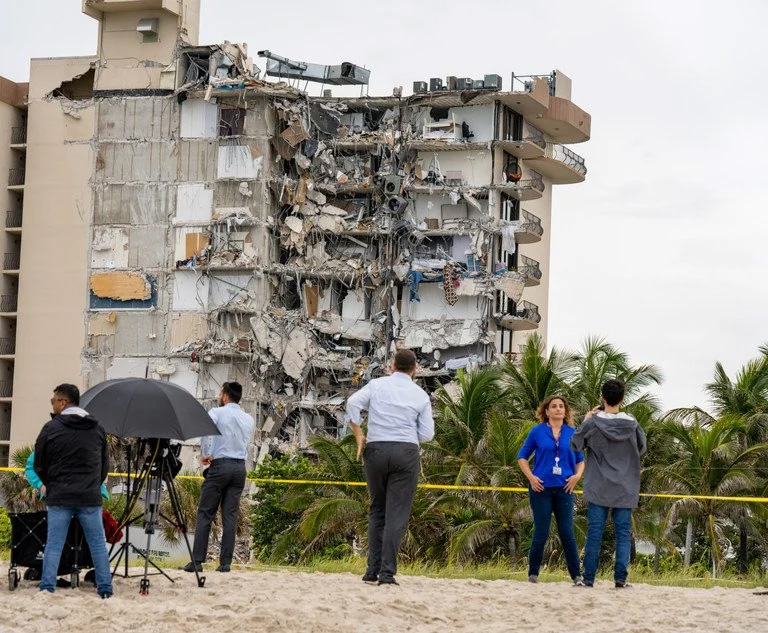 Less than a year after the June 24, 2021, collapse of the Champlain Towers South condominium building killed 98 people in Surfside, a proposed $997 million class action settlement has been reached—to the amazement of many in the legal community.

It’s a result that’s unprecedented in both size and speed, according to Daniel Gielchinsky, founding partner of business law firm DGIM Law, who served as Surfside’s vice mayor from 2018 to 2020.

“From the ashes of this awful calamity arose a principled and fierce determination to ensure that the legal system quickly brought justice to those who needed it most,” said Gielchinsky.

Attorneys for the plaintiffs announced the settlement agreement during a hearing Wednesday. It’s still pending approval from Miami-Dade Circuit Judge Michael Hanzman, who has frequently expressed a desire to resolve the case quickly.

Hanzman previously approved an $83 million settlement covering economic losses such as condominium units and personal property. The final compensation tally could breach $1 billion, as the collapse site will be sold via live auction May 24.

‘Why You Become a Lawyer’

The litigation surrounding the collapse has been a “true whirlwind,” according to Brad Sohn of The Brad Sohn Law Firm in Coral Gables, who was the first attorney to file suit over the tragedy.

“It’s been emotionally exhausting and, at the same time, the amount of pride that I have and the ability to be able to deliver for the victims that had the world’s empathy and sympathies,” said Sohn. “To have this happen in our own backyard is terrible, and the flip side is to able to step up and at least put some of these pieces back together so that they can focus on what’s really important. That’s why you become a lawyer in the first place.”

For Sohn, his biggest challenge was the unrelenting pace of the litigation.

Hanzman has been widely commended for resolving the case so quickly.

The judge called the litigation “heart wrenching” at a March class action litigation forum at the University of Miami, remarking, ”I find it very rare that you have a class action that has both significant economic and significant injury components.”

At Wednesday’s hearing, Hanzman reportedly told the courtroom, “I’m shocked by this result. I think it’s fantastic,” the judge told the courtroom. “This is a recovery that is far in excess of what I had anticipated.”

Miami attorneys Rachel Furst and Stuart Grossman of Grossman Roth Yaffa Cohen and Harley Tropin of Kozyak Tropin & Throckmorton served as lead counsel to the plaintiffs in the class action.

Mark Raymond, managing partner and complex commercial litigator at Nelson Mullins Riley & Scarborough in Miami, said the plaintiffs team should be commended for what he described as “nothing short of an incredible settlement.”

“To get these defendants and their insurers to settle, knowing full well that there are many meritorious defenses to the claims, speaks volumes about their skills as negotiators and as outstanding lawyers,” said Raymond. “The nearly $1 billion settlement is a Herculean achievement. Judge Michael Hanzman summed it up perfectly: ‘Simply amazing. Outstanding.’  While it will never replace the loss of family members it is, nevertheless, a sensational outcome for the families.”

Likewise, Gielchinsky said he’s astonished that the case is near resolution having been pending for less than a year. He noted many case participants never anticipated a settlement could get anywhere close to $1 billion—especially when the property sold for $120 million last year.

“Cases of this magnitude typically take between three to five years or more to reach this point, and appeals often add several more years to the legal process,” Gielchinsky said. “This remarkably swift pace is a testament to the resolve that Judge Michael Hanzman and receiver Michael I. Goldberg showed in pushing the lawyers and parties to quickly bring a significant measure of closure and compensation to the families of those who were tragically lost.”

Although the settlement is a success, Etan Mark, founding partner of Mark Migdal & Hayden in Miami, said there will never be closure for the victims or their families.

“But there can be a sense of justice within the confines of our judicial system. It is remarkable what has been accomplished here and it is a testament to Judge Hanzman and all of the attorneys involved,” said Mark. “So, next time you hear someone disparage our profession, it is worth remembering some of the exceptional work done here.”

The settlement should be a wake-up call for HOAs regarding their exposure to liability risks, according to Jeanne Grove, partner and co-chair of the real estate practice group at Kaufman Dolowich & Voluck in California.

“The HOA, along with several other defendants, including the engineers involved in the development, had reportedly already settled with the plaintiffs earlier for approximately $100+ million,” said Grove. “While the HOA’s reported contribution to settlement represents a mere fraction of the total billion-dollar settlement amount, it is significant enough to confirm the HOA’s concern for its substantial liability in the case.”

Although the developers, engineers and other defendants involved in the construction of the building may be deemed ultimately responsible, the HOA’s role in settlement signals how it also played a part in the tragedy, in Grove’s view.

“The HOA faced the prospect of significant liability in the case for failing to identify the defects in the building and for failing to promptly address them,” said Grove.

Grove suspects the settlement could serve as a precedent for HOA liability in future construction defect cases across the country.

“Although HOA boards are usually comprised of volunteers with no requirement of prior experience in any practice area, this case may compel future board members to take on special knowledge in construction, property management and real estate law,” said Grove. “HOAs across the nation would be wise to check in with their counsel and their insurance carrier to ensure they are code compliant and following best practices, particularly with respect to the management of older buildings.”

Attorney Keith Poliakoff with Government Law Group in Fort Lauderdale represents real estate developers in the permitting process in South Florida and is a city attorney for Southwest Ranches. He said the litigation will ultimately affect Florida building code processes.

Nothing can ever prepare an attorney for a case and tragedy like what happened in Surfside, but Sohn said staying determined and working as a team helped get the job done.

“What made this so different is that everybody experienced … whether you lost your home or lost a loved one, [everybody] lost something unspeakable all at the identical moment in time as well,” said Sohn. “I just think that this is really unique even in the world in which I practice. Always try to make sure you’re the right attorney for your client, that you would want for yourself.”

As the proposed settlement still needs final approval from Hanzman, Sohn said the hope is that victims can start to be compensated by the fall of this year.

Raychel Lean contributed to this report.