HOLLYWOOD — When glitzy twin apartment towers take up residence on the east side of Young Circle, they’ll have bragging rights as the tallest downtown.

The luxury towers, currently dubbed B57 North and B57 South, will rise into the sky nearly 400 feet high, transforming the east side of Young Circle from dormant to dazzling, developers say.

The towers — an ambitious $555 million project calling for 856 apartments — will dress up a blighted corner currently home to a Walgreens and long-shuttered Publix. The project’s high-end restaurants, shops and office space are also expected to draw a crowd, bringing more people to a downtown that has struggled in years past.

A pedestrian skybridge will connect the two towers on the second level, making it possible for cars on Hollywood Boulevard to travel underneath the skywalk, providing direct access to Young Circle for the first time in decades.

“I want to thank BTI for making this investment,” Vice Mayor Caryl Shuham said. “It’s exciting to see. When all of this happens, we are going to have a ton of people walking around downtown. And that’s the goal. Walking, shopping. Live, love, work, play.” 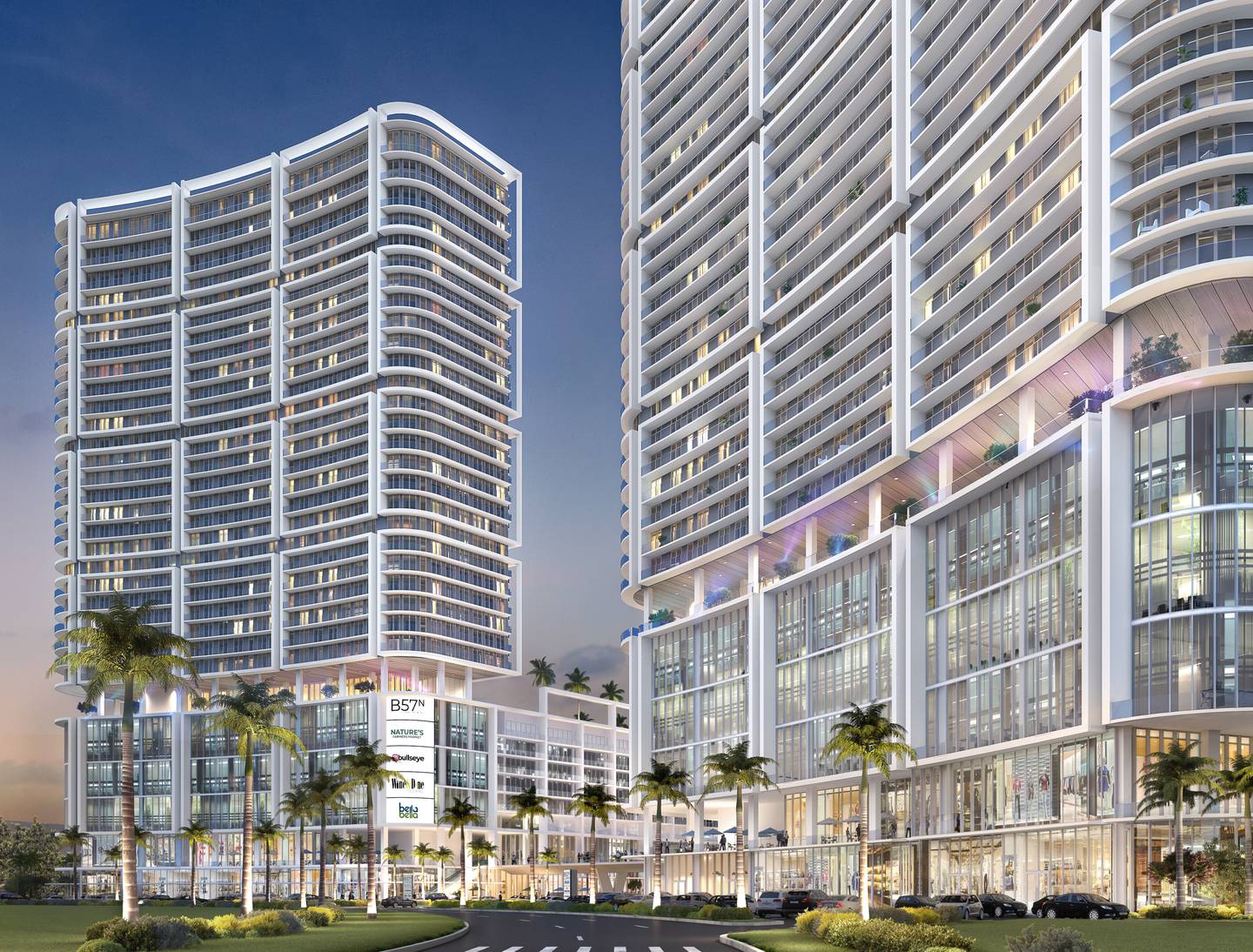 Two 35-story towers would rise on the east side of Young Circle in downtown Hollywood as part of a project planned by BTI Partners of Fort Lauderdale. The $555 million project calls for 856 luxury apartments in addition to shops, restaurants and office space. (BTI Partners/Courtesy)

Construction to start next year

The south tower will go up first, with a groundbreaking expected in June 2023 and construction expected to take two years, said Keith Poliakoff, attorney for the developer.

Both towers will have 35 stories, standing 390 feet high.

The south tower will feature 455 apartments, with 72,600 square feet reserved for restaurants, bars and shops.

The apartments can be converted to condos in the future based on market demand, Poliakoff told commissioners.

Each building will have its own parking garage on levels one through nine, with a project total of 1,636 parking spaces.

For 20 years now, Hollywood officials have been exploring the possibility of recreating that 3.5 acre corner to allow for better traffic flow from the beach to Young Circle.

BTI Partners is making it happen, after getting the required buy-in from state transportation officials.

“This redevelopment, together with the vision of bringing Hollywood Boulevard through the property to Young Circle, took years of work to bring forward,” Mayor Josh Levy said. “Partners like the Florida Department of Transportation, Broward County Transit, the former property owner, and of course, the new owner/developer, BTI Partners, all share in an understanding of how exciting an opportunity this is to further the beautiful living space that downtown Hollywood is becoming, with the ArtsPark as its heart.”

The BTI Partners project would change the way traffic flows around Young Circle. Under the plan, the towers would straddle a new section of road that would open up the east side of the circle, giving drivers a more direct route to the beach. (BTI Partners/Courtesy)

It all started when Poliakoff met Noah Breakstone, CEO of BTI Partners, and suggested he turn his sights on downtown Hollywood.

When the project came up for commission approval on July 6, there was something noticeable missing from the room: Critics.

Poliakoff told commissioners the reason they “don’t have 1,000 people here today” ready to blast the project was because the developer held several meetings over the past two years, vetting his plans with the community.

BTI Partners is also redeveloping another parcel on Young Circle once home to the Bread Building, an 11-story landmark built in 1969.

BTI has already demolished the building and expects to break ground soon on a 25-story tower with 362 luxury apartments and ground-floor shops and cafes. In a nod to history, the vintage Bread Building sign will be saved and used on the new building.

“He envisioned downtown as being a vibrant place for people to walk around, live and work and never leave Hollywood,” he said. “He wanted people to congregate downtown.” 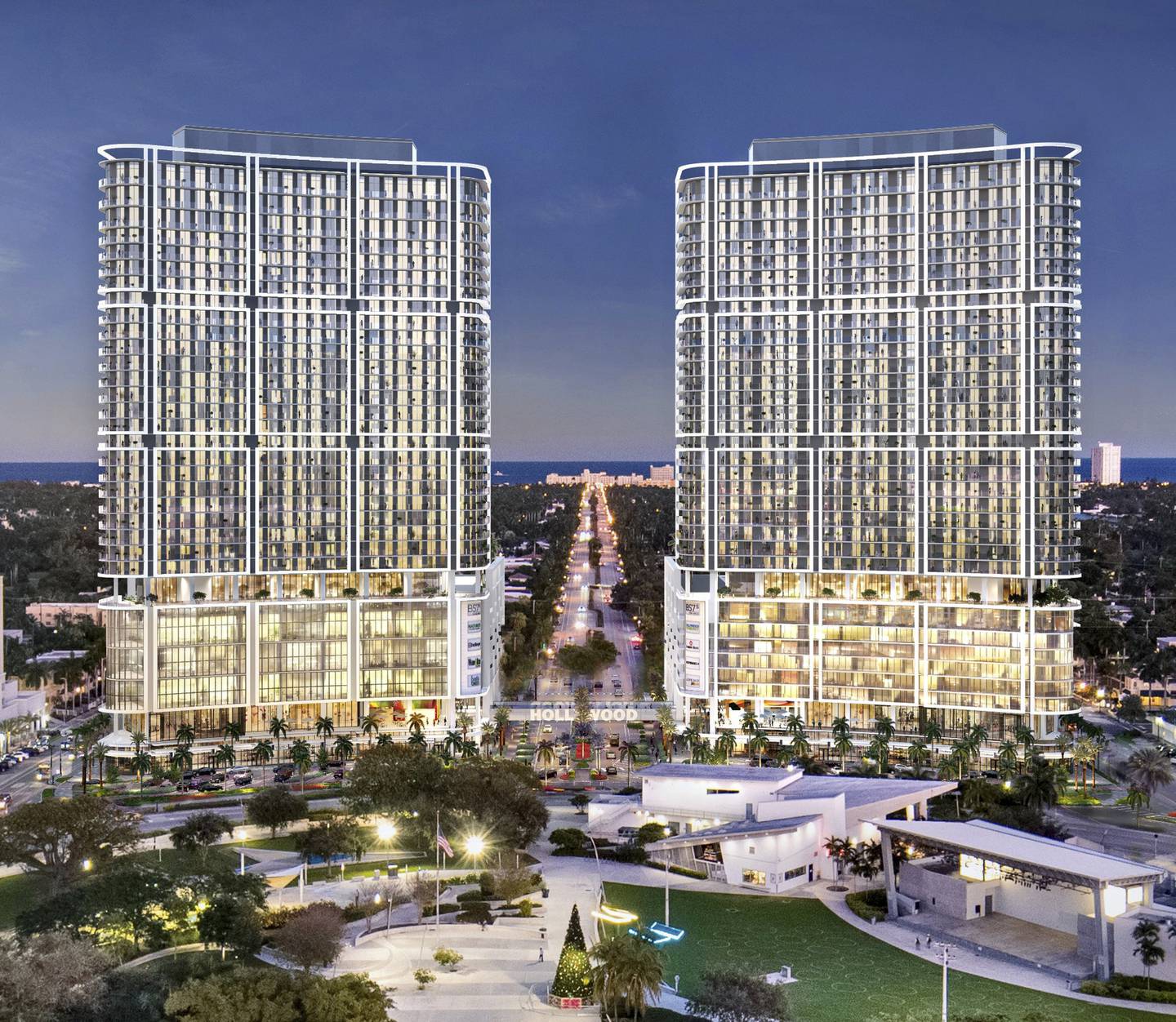 Schorr, who emailed the South Florida Sun Sentinel last year criticizing the project, says it will bring more traffic and potentially crime to downtown. He also says the towers are too tall.

“These tall buildings are going to dramatically change the character of the area, and not in a good way,” he said Thursday. “I think it’s out of character for what Joe Young wanted the city to be. He didn’t want these high-rise monoliths. I don’t think Joe Young would be happy with this at all.”

In his email to the newspaper, Schorr made a dire prediction: “Just like the great hurricane of 1926 that destroyed most of our city, the great development hurricane of 2021 will wreak havoc on our quality of life for decades to come.”

Ken Crawford, another longtime resident and president of the Parkside Civic Association, has a different take.

“Our downtown is growing,” he said. “The more density we have downtown the better off we are, because we’re more of an urban city now. We’re no longer living in 1926. We’re living in 2022. And we have to grow to move into the future.”

Susannah Bryan can be reached at sbryan@sunsentinel.com or on Twitter @Susannah_Bryan

Link: Twin towers, each rising 35 stories, will be the tallest in Hollywood’s downtown
Auther: Susannah Bryan