You are here: Home1 / News2 / Landlords Are Slashing Ties With Tenants to Capitalize on a Hot CRE Market....

“I think there’s going to be sympathy for businesses but at the same time, the law is really designed in a way to capitalistic benefit,” said Jordan Isrow of Government Law Group in Fort Lauderdale.

As commercial rental rates rise in South Florida, some landlords who are locked into leases are hoping to capitalize on the market by getting out of their contracts as businesses relocate and look for space.

That’s according to attorney Jordan Isrow of Government Law Group in Fort Lauderdale, who said he’s seeing landlords find creative ways to get out of their contracts. 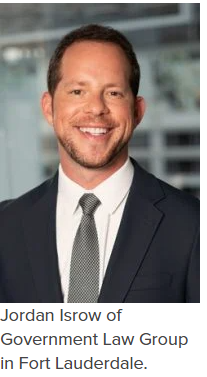 “It’s mostly financially driven, but there may be other reasons as well, which is they may be looking to reshape the overall look and feel of a commercial space,” said Isrow. “They may be wanting to be changing direction and having a tenant they think may not otherwise be a good fit and having another tenant come in that’s competitive to that tenant.”

Landlords might also look for ways to invalidate a tenant’s options to renew, in order to get higher rental rates.

It’s all about looking closely at contracts, Isrow says, as no two leases are created equal. He recommended doing “a deep dive” into the lease and also looking at the tenant’s history.

“For example, I had a client who was looking to get out of a five-year extension that the tenant was otherwise entitled to under the lease,” said Isrow. “We found one provision in there that said that at the time the tenant issues its notice for renewal, it must be in good standing. The tenant missed a payment by just a few days, but that was during the window in which they sent their option to renew. This becomes a game of cat and mouse. We didn’t alert them to this kind of failure and instead waited for the notice window to pass. We informed them they were not in good standing at the time and therefore we were able to remove the tenant.”

There are a lot of prohibitive use clauses in a commercial lease that can prevent a tenant from using the property in a way that the landlord deems a nuisance to other tenants or brings down the value of the property.

Isrow said another strategy is to use the right to entry by a landlord provision to look around the tenant’s space.

“It’s an innocuous way to go in and say ‘We’re just looking around at the common elements.’ If they’re able now, once they’re inside the property, they can start looking around. Is there anything this tenant has failed to maintain that they’re responsible for? Is there any use that may not be in accordance with the lease?”

Ultimately, some landlords are not able to get out of their lease and end up in court, but that’s not the goal. Isrow says some parties are willing to pay their tenants to leave and may even help them relocate.
“They do this because of a cost-benefit analysis. They know that if they break the lease, they’re going to get sued, and they’re going to have to pay time and money for litigation. And if they can shortcut that and save some of the money and put it toward the tenant in a way that helps them get out of the situation they’re in and find another one, then it’s a win-win.”

Isrow doesn’t think the courts want to hurt landlords or tenants, they just starting to recognize the reality of the market.

“Some landlords are going to be able to pull it off, and others may not. It’s a very fact-specific situation,” said Isrow.

For attorneys representing landlords, Isrow says to be very specific as to what the goals are from the landlord, particularly if it’s a financially motivated decision. And before any decisions are made, review the lease.

“In some instances, depending on the relationship between the landlord and the tenant, there may be a viable solution as easy as having a conversation,” said Isrow. “You’d be amazed that sometimes if a landlord goes to a tenant and says, ‘Here’s my issue,’ sometimes that does the trick. Not always, but I think some lawyers are too quick to jump to the litigation front instead of actually finding an amicable solution.”

If a tenant still sues, Isrow believes the courts are sympathetic to the tenants: “I think there’s going to be sympathy for businesses but at the same time, the law is really designed in a way to capitalistic benefit.”

Link: Landlords Are Slashing Ties With Tenants to Capitalize on a Hot CRE Market. Here’s How They’re Doing It
Auther: Melea VanOstrand