You are here: Home1 / News2 / As a luxury sports bar seeks later hours in Delray Beach, it gets caught...

DELRAY BEACH — The issue of whether more late-night bars in Delray Beach could expand farther out on Atlantic Avenue will likely soon come before the city again as a new sports bar keeps up its fight to receive an exemption to stay open until 2 a.m.

And that will likely set up another contentious battle between business owners who want the freedom to operate later and residents who bought homes outside the city’s entertainment district concerned about late-night noise infiltrating their neighborhoods.

Bounce Sporting Club, an upscale sports bar set for the $300 million Atlantic Crossing development on Atlantic just east of Federal Highway, is planning to open in the fall as one of the cornerstones of the new development. The bar, however, sits outside the city’s entertainment district, which runs from Swinton to Federal Highway and allows businesses to stay open until 2 a.m.

That means Bounce would have to close every night at 12 a.m. unless it’s granted an exemption from the city. Bounce says closing at midnight would significantly hinder its business since so many late-night sporting events such as UFC, boxing and West Coast sports last well past that cut-off point.

Bounce narrowly received preliminary approval from the Planning and Zoning Board, but was forced to temporarily pull its application from a Feb. 1 City Commission meeting after significant backlash from local residents about late-night noise issues made it unlikely the proposal would be granted.

Attorney Neil Schiller, who represents Bounce, said they pulled their proposal so they could “educate” more nearby residents about the bar. 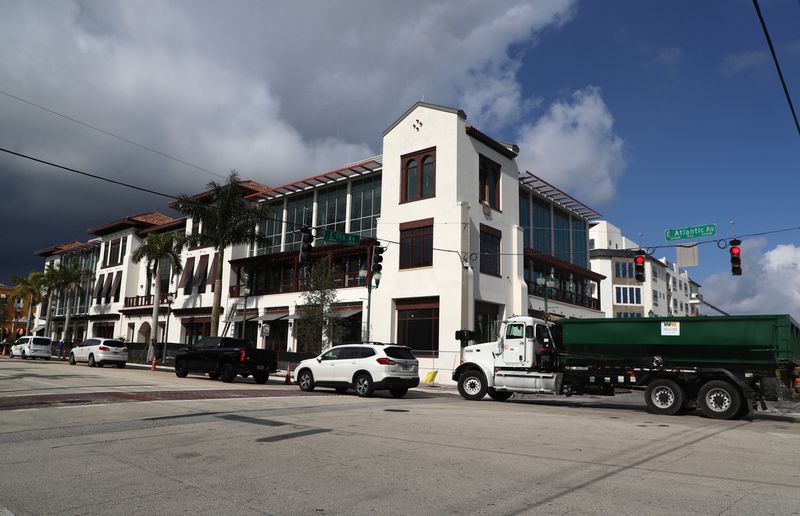 The building that will house the Bounce Sporting Club on East Atlantic Avenue in Delray Beach on Friday December 10, 2021. The $300 million Atlantic Crossing project has generated pushback. Some city officials and residents have expressed concerns the sports bar is out of character for the area and that noise from the late night establishment would be a nuisance to residents (Carline Jean / South Florida Sun Sentinel)

“I know there’s a great concern from the community there’s going to be lines out the door and that all these people are going to be drunk, unruly and noisy and that it’s going to be 1 a.m. and they’re still trying to get in,” Schiller said. “That’s not the case.

“We don’t want our guests to be lined up out the door on Atlantic Avenue. We’re trying to start an upscale sports bar, restaurant and lounge. Upscale places don’t let their guests, especially in Florida, wait in 90-degree heat to come in.”

Schiller said Bounce is willing to make concessions in order for later operating hours, including closing their doors, windows and patio at 11 p.m. and limiting people to one entrance and exit closest to Atlantic and 7th.

Bounce Sporting Club bills itself as combining “elements of a sports bar with the high-end cocktail lounge nightlife experience.” A representative for Bounce, which has additional locations in New York and Chicago, told city officials it would also feature live performances at the Delray Beach location.

Bounce has residential communities both to the north and south, extending east to the Intracoastal. In addition, the Atlantic Crossing complex also will feature 261 luxury apartments by the sports bar.

Some nearby residents, however, fear that allowing Bounce an exemption could create a domino effect where other bars outside the entertainment district would be granted later hours. Rita Rana, who sits on the board of Barr Terrace Condominiums across the Intracoastal from Bounce, said residents aren’t opposed to Bounce, but the potential of them operating past midnight and creating a situation where late-night revelry and noise could potentially cause issues.

While Bounce officials are trying to assuage the fears of nearby residents, Rana said “prior to opening, there is absolutely nothing they could say and nothing they could do” to convince her they should be allowed to stay open until 2 a.m, adding that residents are still “fired up” about the matter.

Schiller believes some of the concerns are being overblown, arguing that some bars outside the entertainment district, such as Hurricane Bar & Lounge and Blue Anchor Pub, are allowed to stay open until 2 a.m. since they were grandfathered in before the boundaries were set.

Bounce is aiming to go before the city commission at some point in the spring, Schiller said. When asked whether Bounce would still open if it was denied the exemption, Schiller said it wasn’t something he could answer, but noted that investors were under the expectation the bar would be allowed to stay open until 2 a.m.

If there’s still heavy pushback, he said there could be the potential for compromise “if they want us to open until 1 a.m. for a period of time and then give us a chance to prove ourselves to get to 2, that’s something we may be in favor of.”

Link: As a luxury sports bar seeks later hours in Delray Beach, it gets caught in noise battle with neighbors
Auther: Wells Dusenbury